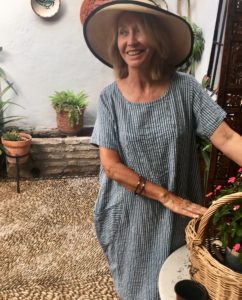 Juli Jana has been active in writing circles in London since 2005. She attained a Masters Degree in Creative Writing at the Universty of Roehampton, London in 2011, has published in various magazines and has had two pamphlets published.

juli Jana’s poems are awash with colour, specifically as well as generally, tinged with the abstract, the spiritual. Alongside her narrative lines she creates other worlds, the surreal, both gentle and harsh and always compelling; yet just as often she concretises these things, describes the detail, the hardness, the real.

She often uses the natural world, subtly anthropomorphises, leaving spaces, ambiguity, inviting us to fill them in, as if somehow we are writing the poems with her.    Ken Champion